Damson Poets is on this coming Wednesday, 30th October, and will be held in the Snug at the Continental. This month I am really pleased that Jane Routh is our Guest Reader

Jane Routh has published four collections (most recently Listening to the Night 2018). She won the Poetry Business Book and Pamphlet Competition with her first collection, and has been shortlisted for a Forward Prize and had a Poetry Book Society Recommendation.
Jane contributes articles and reviews to several journals and has also published a prose book, Falling into Place, on wildlife, weather and work in the rural area where she lives in north Lancashire, managing an area of ASNW and new woodlands.
She was asked by the BBC to write a poem for this year’s National Poetry Day. Here is the result:

One of the pleasures of being in a local Poetry Society such as Preston Poets is that there are always people who know stuff about poets I should have heard of.

Norman Nicholson was born in Millom, Cumbria, in 1914 and lived there for the rest of his life. He was award the Queen's Gold Medal for Poetry in 1977, and the OBE in 1981.

Nicholson also wrote what David thought of as the best Guide to the Lakes ever written.

David is an antiquarian bookseller and member of our Society and brought along 12 copies of Nicholson’s selected poems which he handed out to keep.
Posted by terry quinn at 03:00 No comments:

A few months ago I went to a poetry reading that was followed by a Q&A session. Whether Q&A is a good thing may be dealt with another time.

Anyway, during this session someone asked the panel of the poets who had been reading whether going to Poetry Courses, Exhibitions, Festivals etc increased one’s chances of getting published. The question was related to the ability to pay for these quite expensive events if one was unemployed or on a low wage. This, obviously, means that one is not making contacts or friends in the poetry scene.

The answer was that this made no difference at all and that if one’s work was good enough then it would be published.

What a load of rubbish.

I could name half a dozen books off the top of my head that would not have seen the light of day without the poet knowing the publisher. And I’m not just talking about going to the same University.
Posted by terry quinn at 01:35 No comments:

I  wrote the following for Lancashire Dead Good Poets a few months ago:

‘In 2012 I tuned into the BBC for a reading of The Wasteland by Jeremy Irons and Eileen Atkins. I seem to remember recoiling in a mixture of horror and laughter. I'm not sure about Atkins, but Jeremy wasn't reading but performing.That was when I started to notice that there is a difference between poets reading poetry and actors reading poetry. I came across a phrase that sums up that difference. This person (and I can't find their name, damn it) said "Actors read vowels and poets read consonants." Another way of looking at it is that vowels are the emotion and consonants are the intellect. Consonants can only be spoken in one way and so make speech hard and crisp but vowels can be pronounced in many ways. Thus with consonants there is a concentration on the words being spoken but with vowels their open-ended nature gives rise to you listening to the pronunciation, the rise and fall of the voice, and away from the meaning of the poem.’

Later I came across this in an article I had saved in 2013. I’m pretty sure it was by Al Alverez:

Given the chance, I'd expel actors from my poetic republic, on pain of hearing an endlessley repeated reading of Tennyson's 'Break, Break, Break', given by Donald Sinden. Because, for the most part, they just don't get it. Their oratorical training lends them power, charisma, grandiosity and flashes of the craftily sincere, but also a tendency towards what Basil Fawlty described as the bleeding obvious. Those silken or trumpeting tones belong in the auditorium or on the screen: they are so rarely equipped to touch on the idiosyncratic mysteries of the poem.
Some years ago, there was a Radio 4 reading of Keats's 'The Eve of St Agnes' by Michael Maloney. It should have been a rare treat to hear the whole of a great poem. It wasn't. Maloney's enunciation, his intonation, his abrupt, non-metrical pauses, his obtrusive sense of himself were all so acute that the effect was emetic rather than scary, sensual, forbidden and delicious. No inner life: all display.
On another occasion I witnessed Fiona Shaw reading Eliot's 'Waste Land', a show that won golden acclaim. She can be a fine actress, certainly but what she inflicted on 'The Waste Land' failed to capture its fragmentation, its repressed torment, its distinctly conservative apocalypse. Pound knew what he was about with his editing and what he didn't aim for was melodrama. Listen to Eliot's own reading and you will overhear the true timbre of desperation. Especially on Margate beach.
The flaws in a poet's reading are very often an aspect of the poem's dark corners and infuriating ambiguities. Take Simon Armitage on the West Yorkshire attack; Jackie Kay a burst of sunshine, a growl of rage. Seamus Heaney, that gentle, tough, tentative bear of a man. Or the deceptively offhand Don Patterson, the quirky, stubborn, slightly bonkers Selima Hill, the much-more-acerbic-than-she-seems Wendy Cope.
Posted by terry quinn at 00:46 No comments:


I  went to a seminar on the subject of blogs and websites at the Wolverhampton Literature Festival recently and it completely changed my mind as to the use of  such things. So, let’s start again.
Posted by terry quinn at 00:44 No comments:

One of the minor delights of working as a Medical Engineer in the NHS was the opportunity to slip off if I’d been sitting down too much at the bench. Save up a few jobs and say I’m just going to Ward such and such and I could have a stroll, a chat to people and get back a bit later refreshed.

One of the problems of writing now is the sitting down without an excuse to move. I always fancied getting a lectern. In fact, I still do. But I did find a sort of solution towards the end of last year when, of all things, I’d put a small table on top of my dining ( and writing ) table to get it out of the way when I vacuumed. The combined height is just about right although the surface area could be improved. Vacuumed.

I use it for two tasks. In the morning I can lean on it, hold it and lean back, stretch my legs and most usefully it can be used to lay down my A4 sheets, pencil and rubber. In the evening it does duty as a place to put my laptop.

I was feeling rather pleased with myself until I discovered that loads of other writers have written standing up. Rather confusingly not many seem to be writers that I like.

However, I then found that there are other ways of solving my problem. There are actually companies that make stand up desks with or without drawers. I presume an online search would find something to suit and joy of joys I’ve heard of some that come with a foot rail.

I have seen an adjustable computer desk although I can’t remember where it was. And I don’t really like designed computer desks as most that I’ve seen are useless.

It’s possible also to make a desk that fits to the wall. I have thought about this but I don’t really have the space unless it folded up and I think I’d find that irritating.

I just had a peep on the internet to check on any articles on standing and writing and blow me there’s dozens. In the second one I read the writer actually said ‘that having a stand up desk is now hip’. Hip. 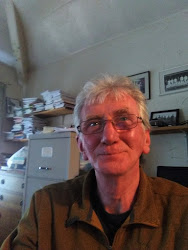 terry quinn
Terry Quinn worked in the NHS as a Medical Engineer before retiring in 2012. His first collection of poetry is ‘away’ (Poetry Monthly Press). His next collection ‘The Amen of Knowledge’ ( Indigo Dreams Publishing ) won the Geoff Steven’s Memorial Prize in 2012. His poem ’12th Law of Physics’ was broadcast as runner-up in the BBC Poetry Proms 2014. His joint collection with Julie Maclean ‘To Have To Follow’ ( Indigo Dreams Publishing ) was published in 2016. He organises the monthly Damson Poets events in Preston and is on the committee of Preston Poets’ Society. He loves walking and still has hopes of being a professional footballer.